Feel like I’m always apologising at the start of my posts. This time it’s because I haven’t posted in a while. That has a lot to do with the fact that I’ve been feeling ‘better’ of late (a good thing obviously). I know that shouldn’t be a reason not to blog, but it also has a lot to do with the fact that I’ve been having thoughts of why am I doing this? I know lots of newbie bloggers have this thought. Plus I have this conflict in my head between blogging and the association with my twitter account, which is linked to work and, well, my twitter account has clients following and I don’t think they need to hear about this stuff. And anyway, the long and short of it is that rather than start a new twitter account for this (personal) side of my life, I’ve ejected my work related  followers (for the most part) and re-purposed my twitter to only be about me and not work (not that I ever tweeted much about work anyway) and I’ll set up a work-related twitter account. There.

So, I went to see a film at the cinema the other night – actually I’ve seen a few new releases lately thanks to my new ‘commitment’ (lol) of subscribing to Cineworld Unlimited. But this one in particular struck me as one that I wanted to share my opinion on. My last (and only to date) film review on here was for Argo – which I loved and have been pleased to see glean success at the annual awards ceremonies. Seriously, though, Lincoln?!?

I’ve gone with Arbitrage this time – a film that has been touted as its headline star Richard Gere’s best ever performance. This did rather draw me in – good job PR people. I’m really not a fan of Gere. In fact I must admit he would normally put me off a film – though not as much as Tom Hanks of course. But I went along with an open mind – promise. An open mind about him at least, not about the plot-line which in no way caught my imagination:

A troubled hedge fund magnate desperate to complete the sale of his trading empire makes an error that forces him to turn to an unlikely person for help.

Still, at the very least I was promised performances by Susan Sarandon and Tim Roth if all else failed. I did say I had an open mind, right?

Uh-oh these little piggy eyes are about to close

Gere plays Robert Miller, a wealthy New York CEO in the midst of a deal to sell his company. A man also in the throws of an extra-marital affair with a promising artist to whom he is benefactor also. But beneath the surface things aren’t going well for Miller. It appears the deal is stalling and the funds borrowed to help secure it all are under threat, leaving the potential to ruin Miller and his family. Which of course takes its toll on those around him, and in particular, his bit on the side who, in recompense for his inattention, he decides to whisk away on a spur of the moment trip to an up-state love-nest. Poor Miller is stressed and tired, falls asleep at the wheel and crashes the car, killing the girl.

What he does next, of course, provides the intrigue for the rest of the film. He walks away and tries to cover up the crime in order to help prevent a situation that could jeopardise the sale of his company – what was he thinking!  He calls on the son of a deceased former employee and Harlem resident Jimmy Parker (played admirably by Nate Parker) to help cover up his actions. Will he get away with it? Enter Tim Roth as terrier-like NYPD Detective Michael Bryer who, once he gets the scent of rich-guy cover-up, goes to great lengths to savage his suspect. 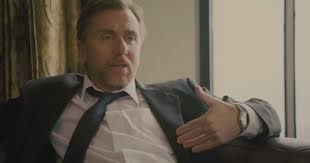 Roth: Bearded and bold but left me cold

It’s all a bit ‘so what?’ really. I don’t know if this was Gere’s finest performance or not. I’m guessing it wasn’t so stand out even to its producers that it warranted an earlier release in the hope of winning him an Oscar (says cynical me). He puts in a good performance but this role and plot was hardly groundbreaking and while the piece overall just about kept my interest I was by no means captivated by any aspect of it. Susan Sarandon is woefully under-used in the first half of the film for such a fine actress but then the role never really offered much opportunity to surprise. Tim Roth is fine but, similarly to Sarandon, I felt any other number of actors could have played that part and offered up the same kind of performance.

I felt the part of the plot to use Jimmy Parker to cover Miller’s trail was cliche and frankly left me a little uncomfortable. Really, is Hollywood still so dated in its attitudes as to have the only possible option for an accomplice to be a young black guy from Harlem with a criminal record whose association to Miller is as the son of a now deceased former worker (probably the office janitor) ? Oh. Yeah. Incidentally there were no other actors of colour in any significant role in the movie. And don’t give me the line that ‘yes, but this reflects true-life corporate America’ because I don’t believe that this is a valid reason to stick with out-dated and prejudiced stereotypes.  Perhaps first-time full-length feature director Nicholas Jarecki lacks maturity to see this.

At the end you’re left a little puzzled as to what has really transpired. Yes he was guilty. Does he get his comeuppance?  I’ll leave that unanswered so as not to ruin completely, suffice to say I’m not sure. Do we learn anything? Yeah. It’s tough at the top. Boo-hoo!